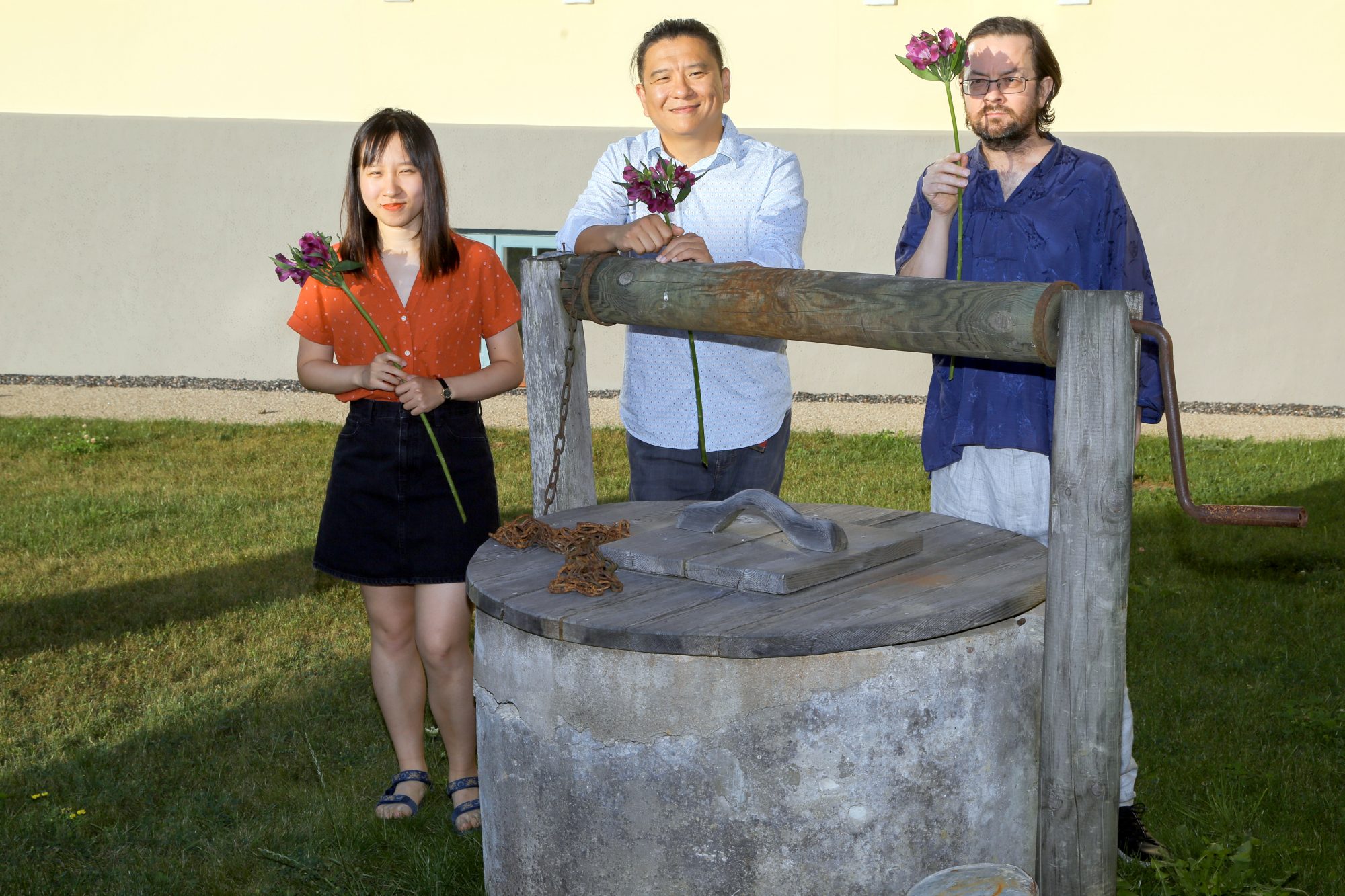 On the afternoon of 26 August, anyone interested could visit the International Artists’ Residency “Pedvāle” to meet the artists of the August residency programme and view the works created during the residency.

Painter Hao Shi exhibited 16 paintings created during the residency – mostly portraits painted in bright colors and expressive strokes. The artist was born in China but was educated and lives in the USA. Hao Shi is a professional scuba diver and the visual experience gained in the underwater depths is embodied in his creative expressions.

Chinese multi-artist Juan Lin presented several installations to the audience. The first was a “Dessert Table”, made from stone fragments found in the workshop of sculptor Ojārs Feldbergs. The dessert menu included both cheesecakes and a Napoleon and a fruit shake. The next installation is named “Collection of Findings”. There, the artist exhibited various objects that she had found while walking around the Pedvāle Art Park during 4 weeks. The walks are also recorded in 20 black-and-white photographs taken by using a film camera. Juan Lin concluded her presentation by singing “Come Again: Sweet Love Doth Now Invite” by John Dowland in the courtyard of Fircks-Pedvale Manor.

The third participant of the August residency programme was Slovenian poet and translator Gašper Malej. During his residency, he noticed the catalogue “Ordinary Stone” in the Pedvāle library. It was created in 1989 by sculptor Ojārs Feldbergs and poet Uldis Bērziņš as a joint work. O. Feldbergs comments on the installation “Ordinary stone” – “I dedicated it to my father Alberts Feldbergs and to the people of my nation whose path of suffering to Siberia is marked by stones”. On his turn, Uldis Bērziņš said – “I dedicated the exstallation of these poems to those who stood against the totalitarian regime – both in an open and underground struggle, or maybe in their hidden imagination…”. On 26 August, five of the poems of this cycle were read in public. Poems were read in Latvian by Una Aleksandra Cherenkova, the daughter of poet Uldis Bērziņš, in English by Laura Feldberga, the daughter of Ojārs Feldbergs, while in the voice of Gašper Malej this poetry sounded for the first time in Slovenian. These lines of poetry are so relevant and apt today in the context of the ongoing war in the Ukraine and the dismantled “Monument of Victory” (Monument to the Liberators of Soviet Latvia and Riga from the German Fascist Invaders) in Rīga.