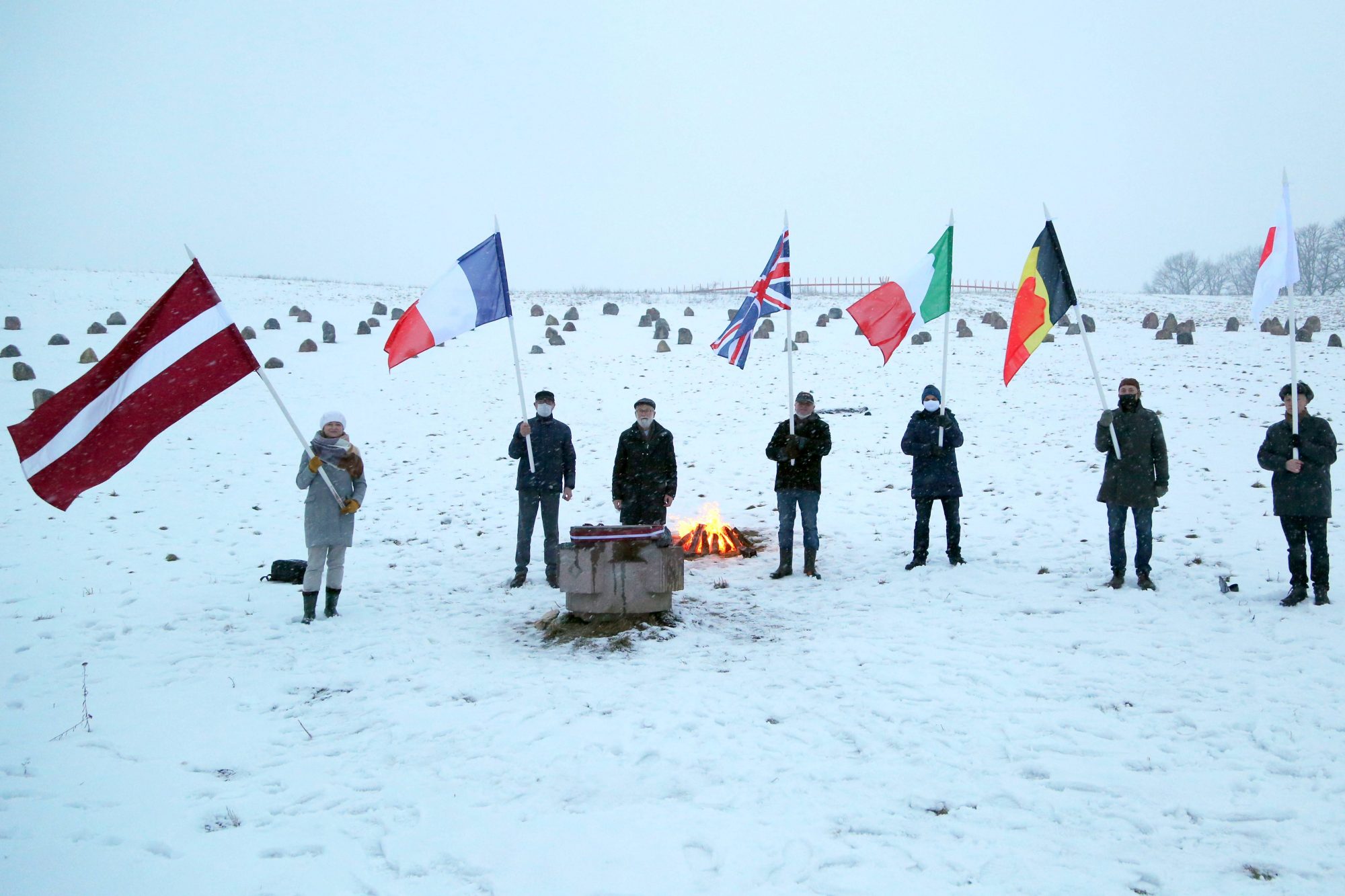 On the afternoon of 26 January, at the foot of Briņķi ​​Hill in Pedvāle Art Park, a performance was performed at the environmental art object “Meeting” by Ojārs Feldbergs in honour of the centenary of de jure recognition of the independence of the Republic of Latvia.

One hundred years ago, on 26 January 1921, in Paris, at the session of the Supreme Council of Allied Powers, which was attended by representatives of Great Britain, France, Italy, Japan and Belgium, the independence of the Republic of Latvia was recognized “de iure”.

Ojārs Feldbergs performed the performance together with the members of the Association “Pedvāle” Ilze Indriksone, Eduards Juhņevičs, Guntis Brauns, Arvils Endols, Zigurds Krebss and Andris Millers. It was a symbolic rapprochement between the world’s great powers and Latvia to a common burning fire. In the centre of the environmental art object “Meeting” the sculpture “Latvia” by Ojārs Feldbergs is located, around which a red-white-red ribbon was tied during the performance, symbolically strengthening the borders of our country.

In his memoirs about this historical event, the diplomat Oļģerts Grosvalds writes: “I was sitting at my desk when the phone rang straight at five o’clock. I slowly lifted the receiver: what good can come now? Suddenly the voice of the political director, Count Peretti, is heard: “I can tell you the good news that Latvia has just been recognized by the Supreme Council de iure. I wish you luck!” The feelings of the moment are difficult to describe, but it seems to me that the receiver began to tremble a little in my hands. Our direct task was achieved, it was achieved what the best sons of Latvia had given their lives for – complete independence.” On 28 January, the official letter of recognition was received on behalf of the Supreme Council addressed to the Chairman of the Latvian delegation Oļģerts Grosvalds. In turn, less than eight months later, on 15 September 1921 in Geneva, the Republic of Latvia was accepted into the League of Nations.

International cooperation has been very important for Pedvāle Art Park since its foundation. For 30 years, artists from all 5 countries have been visiting Pedvāle and have worked creatively here. Japan, which he visited in 1991, is especially close to the sculptor Ojārs Feldbergs, and it was one of important sources of inspiration for the creation of Pedvāle Art Park, whereas iIn France, Great Britain, Italy and Belgium O. Feldbergs has planted Latvian stone seeds.

Therefore, on 26 January, O. Feldbergs invited the representatives of the Association “Pedvāle” to honour the centenary of the historical event and to strengthen Pedvāle’s international cooperation in the future.